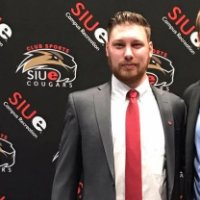 Phil is a native of Giessen, Germany, a city approximately 40 minutes from Frankfurt. He grew up with a love of basketball, and played club basketball all the way through Semi-Professional level. In August of 2009, he moved to the US (Michigan) permanently for college. In August of 2014, Phil graduated with a Bachelor's Degree in Sports Management, and a second Bachelor's Degree in Business Administration with a concentration in Law and Economics from Central Michigan University. He finished his Master's Degree in Kinesiology, with a concentration in Sport Psychology in 2017 from Southern Illinois University Edwardsville. It is here that Phil currently works as the Club Sports and Special Events Coordinator.
Phil has over 8 years of coaching experience and has been the Head Men's Club Basketball Coach at SIUe for the past 2 seasons. In addition, Phil was the Head Freshman Boys' Basketball Coach at Shepherd High School in Michigan from 2012-2014. During this time, he set up a recruiting program called HoopRecruit for high school basketball athletes to get the right college exposure. Prior to this, Phil was the Team Manager from 2010-2011, and the Video Coordinator from 2011-2012 for the Men's Basketball Team at Mid Michigan Community College.
During his spare time, Phil enjoys spending time with his wife Kylee and daughter Sophie. In addition, he enjoys watching and attending sporting events, traveling, and remodeling his home. Phil wishes to continue on pursuing a career in sports administration either at the collegiate or professional level.